Creation of a City

An Excerpt from my book Prohibition Madness 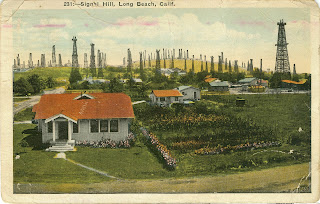 On April 7, 1924, the City of Signal Hill was created when voters in the oil district cast 348 ballots in favor of incorporation and 211 against.  Because of oil discovered on the "hill" in 1921 they were now the richest city in America.
Forty-eight year-old Mrs. Jessie Elwin Nelson was elected mayor and won the distinction of becoming the first female mayor in Southern California.  The Jessie Elwin Nelson Academy on Signal Hill is named in her honor.
A correspondent for the Long Beach Press Telegram, Jessie Nelson’s story was the first to describe the initial discovery of oil on Signal Hill, the “spudding in” of the Shell oil well on June 23, 1921.  She evocatively captured the scene in the Press Telegram:

“Gravel, shot from the vortex of the roaring gas spout, stripped the insulation from nearby electric wires.  The resultant sparks ignited the gas and writhing jets of flame set a lurid light over the landscape.”

The Tennessee native had lived on Signal Hill for twenty years in an old fashioned yellow frame house set among a ragged cluster of trees with a grand panorama.  Pigeons cooed about the home at Cherry Avenue and Hill Street and a bay mare had the back lot all to herself. When the Nelsons settled on the Hill in 1904 only eight houses could be counted on the plains below. Jessie’s husband, Zechariah T. Nelson, had relentlessly sought to preserve Signal Hill as a residential district, unmarked by industry.  It was he who was instrumental in securing a scenic drive on the hill and other improvements. Perhaps it was the discovery of oil and the altering of the place he loved that caused him to die of a heart attack on July 4th 1922, at the age of seventy-three.  But Jessie accepted the changes fate had brought and explained it was “taxation without representation” that forced the Hill to incorporate:

But it was no longer a place where many people chose to live.  The 1500 people who called the Hill “home” in 1924 resided in three residential areas, apart from the derricks.  However, they had to live with the hissing sound of escaping steam and  a constant whine of noise from the pumping of machines.  Signal Hill was by day an industrial landscape, sown with derricks springing like monsters from the earth.  By night, when accumulations of natural gas burning with a muffled roar illuminated the sky, Signal Hill became a Dantesque landscape of flares and shadows, filled with the drone of still pumping machinery.   Mayor Nelson  resigned in 1925, broken health given as the reason. (Press Telegram  3/17/1925), though others thought it was because of what the city had become (Press Telegram 3/11/1925).  But as an independent city it could cast its own future, and it did---one that went easy on gamblers, bootleggers and crime, until urban development in the later part of the 20th century made it a respectable and desirable place to live once again.

Walter Case's History of Long Beach and Vicinity (1927), also used as source for this story.

Claudine Burnett
My latest book "The Red Scare, UFOs & Elvis: Long Beach Enters the Atomic Age has now been published (July 2018). In it you will learn about life after WWII, the baby boom generation, fear of atomic attack and Communism, mystery submarines off the So. Cal. coast, the birth of rock 'n' roll, UFO sightings and alleged abductions in So. Cal., and the truth behind Roswell. For more go to my website www.claudineburnettbooks.com